Of course your toddler is drawn to a shiny, colorful screen that responds to her touch by lighting up, moving, and making noise. No doubt you’ve figured out that your iPad can magically captivate and occupy your tot during waits at the doctor’s office and long car rides. Good for you for giving her fascination real thought, but you can lose the guilt on this issue: Though experts haven’t fully figured out the downsides or benefits of iPads for kids (even if you can’t remember how you lived without it, since the iPad was only introduced in 2010), there is no evidence that using an iPad will harm your toddler’s physical or cognitive development — as long as you practice moderation.

And rest assured you’re not the only Mom who has passed her tablet on to her tot. It’s now commonplace to see kids as young as one and two years old adeptly navigating touch screens with their tiny fingers mere months after they’ve mastered the “pincer grasp”. In fact, a 2011 study from the nonprofit group Common Sense Media found that more than half of all children have access to a touch device such as an iPad or smartphone. The study also found that more than a quarter of parents have downloaded apps specifically for their kids to use. Since those percentages have only increased over the years, it’s important for parents to know both the pros and cons of toddlers’ tablet use — and to put some rules in place.

THE BENEFITS OF IPADS FOR KIDS

Not only is the iPad an engaging toy that’s small enough to fit into your bag and take on the go, but some studies indicate that it can have real educational benefits for young children. Research sponsored by the Joan Ganz Cooney Center at Sesame Workshop found that certain apps may improve children’s vocabulary and math skills. There is also evidence that in children with cognitive delays iPad apps can boost language use and social interaction.

While too much screen time is always a concern for parents since it has been linked to attention and conduct problems in children, a 2013 study published in the Archives of Disease in Childhood found that digital games (which are interactive and can foster creativity) seem to affect children differently than TV (which is not typically interactive). The researchers discovered that while excessive TV watching slightly increased a child’s risk for conduct problems, age-appropriate digital games did not. 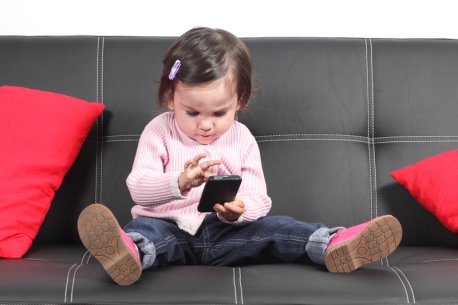 THE PITFALLS OF IPADS FOR KIDS — AND SOME GUIDELINES

Even though there may be benefits of iPads for kids, that doesn’t mean you should let your child use an iPad for hours on end or stick a screen in front of her face every time she’s in a waiting room, since that’ll keep her from learning how to occupy herself with her thoughts and imagination.

When it comes to kids and iPads, your best bet is to follow the guidelines that the American Academy of Pediatrics (AAP) has set regarding other screen time. The AAP recommends no more than two hours of screen time (such as TV, computers, and video games) per day for kids two and older, and ideally no screen time for children younger than two.

Keep screens out of your child’s bedroom since they are stimulating and can interfere with sleep, monitor your child’s viewing and apps to make sure content is appropriate, and talk to your child about the programs and apps she’s using. You can check out  A matter of Apps for recommendations from a developmental psychologist and media researcher.

For more great articles and tips, please subscribe to receive our latest articles or join our new Facebook group. Got a childcare related question? Drop us a line at sitters (@) sitters4u.co.za or visit our website: www.sitters4u.co.za

Have your say Cancel reply

This site uses Akismet to reduce spam. Learn how your comment data is processed.